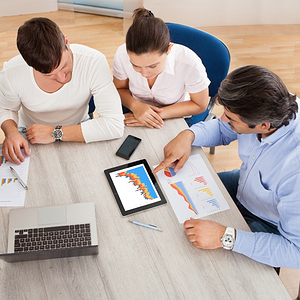 Microsoft Planner is similar to kanban-style, card-based project management tools like Trello and Asana. Users start by creating a plan or project and adding group members. They create boards to organize different project aspects and individual cards for specific tasks. Each task card can be filled out with further detail, including people assigned to work on it, descriptions, uploaded files, checklists, comments and color coordination. Users also can arrange their cards into columns, called Buckets, for easier organization and management.

Users can keep track of multiple plans via the Planner Hub, which has a visual, chart-based overview of progress on multiple projects. In addition, they can track team and individual productivity and can easily access individual tasks.

The integration with other Office 365 software makes Microsoft Planner a particularly useful addition for businesses already using the suite. For example, organizations that are using Microsoft Groups now automatically have access to the Planner interface for each group. When they create a new plan, the software automatically creates a group of the same name. Notifications for tasks and assignments show up in Outlook, and users can attach Word, Excel and PowerPoint documents to cards for collaboration and discussion. Each plan automatically gets a OneNote notebook, too. By having a single interface for their projects, businesses can more easily keep track of and manage their projects without having to completely learn a new system.

How Businesses are Using Planner

Another example comes from Portugal-based Câmara Municipal de Cascais, which uses Office 365 as an integral part of its transition from a paper-based company to a digital municipal administration. Using Microsoft Planner has helped its 2,000 employees improve their productivity, organization and project completion times. They have found it useful for planning major projects, including the implementation of the company intranet. It has also improved accountability and the on-boarding process for new team members.

Microsoft Planner will become even more useful for small businesses in the future. Microsoft’s Office 365 Roadmap lists several planned features that will make Planner an even better business productivity tool. Some of these features include the ability to assign multiple users to each task, collaborate with people outside the organization and have a timeline view of the main project milestones. Microsoft also plans to introduce mobile apps for its major platforms.